With these LEGO race car ideas, you can capture the excitement of your students as you challenge them to create the best simple LEGO car designs that will win a gravity-powered race.

It’s no secret that LEGO bricks just on their own help develop problem-solving abilities, creativity, logical planning, spatial awareness, and hand-eye coordination. But LEGO can do so much more than just act as a creativity-boosting toy for children.

Build your own race car, and you can transform simple playtime into a bona fide engineering activity for kids. Learn about force, motion, trajectory, resistance, and propulsion through physics and engineering when you try out these easy LEGO race car designs.

These fantastic LEGO race car ideas show that fun can still be educational! Try a few and see which one moves the fastest. Furthest? How do drag and friction affect the movement of each LEGO car?

Keep track of your students’ hypotheses and outcomes for a fun engineering activity!

LEGO Race Car Ideas that Teach the Laws of Motion

Physics is a confusing topic for many kids. But few kids balk at the idea of playing with LEGO bricks. That’s why I love using LEGO car races as a way to illustrate the basics of physics and Newton’s laws of motion.

Keep reading to learn more about the science of car racing and why I love using a race track and LEGO car racing to teach kids about Newton’s first law, second law, and third law.

The Physics of Race Cars

Engineering is all about creating the best and simplest design to reach a goal. When you are building a a race car from LEGO, you want it to win.

But if you don’t know about the physics and science that affects the performance of your LEGO car, you won’t have the knowledge necessary to create winning race cars.

All cars, whether made of LEGO or not, operate using Newton’s three laws of motion.

So, when designing a DIY race car from LEGO bricks, and putting together LEGO car sets, reducing its mass, reducing friction, and increasing acceleration will all improve the speed of the race car.

If you don’t want to have the hassle of ensuring that your students have enough LEGO car-building bricks, an alternative option is to use some of these other race-themed STEM activities to teach Newton’s laws of motion to your students.

These are my favorite car racing STEM kits (particularly the Klutz LEGO set).

If you like these LEGO race car engineering ideas, then you’ll want to check out these other fantastic LEGO STEM activity ideas!

If you don’t have the correct pieces to build DIY LEGO cars, you can still teach students the laws of motion with a LEGO race car kit!

Have your students build one design as a team or pick up several different kits and see which one performs better in engineering design race test.

Tracks to Use for LEGO Car Races

While there are several ways to power a LEGO race car, such as with balloon-powered lego cars, solar or battery powered racing cars, and rubber-band powered LEGO cars, my personal favorite type of race track is a gravity-based race track like they use in the good old Pinewood Derby.

Here are some fun tracks that have many uses in your STEM classroom beyond this simple aerodynamic race car engineering challenge.

Aerodynamic Tips to Remember When Designing a DIY Race Car

By understanding the basics of race car engineering and aerodynamics, you can make modifications to your LEGO car to maximize its speed.This includes changing the weight distribution, adding spoilers or wings to increase downforce, and optimizing air flow around the body of the car.

With these modifications, you can drastically improve your race car’s speed and performance!

Aerodynamic forces are created by the airflow around objects. The shape of a LEGO car can either increase drag, by making it harder for the air to pass over the car, or make it easier.

One of the simplest ways to reduce drag is to add spoilers and create a design that is smooth and streamlined.

In addition to airflow around the body of a LEGO race car, the wheels of a race car can also influence how much drag it has. This is called “wheel wake.” Certain wheel designs reduce wheel wake, which is why many professional race cars have smooth tires.

If your students want to dive deeper into the physics and science behind race cars after completing your LEGO car race STEM challenge, I highly recommend these books for further reading.

Or, read the books together as a class before completing any LEGO race engineering test.

How do you make a Lego race car go faster?

Here are a few quick adjustments you can make to your race car to make it go faster.

The weight of the LEGO vehicle can be adjusted by adding or removing pieces.

A LEGO race car will have improved aerodynamics if you add fins and ensure air can flow freely across the top of the car to reduce air resistance.

By following these steps, you can make sure that your Lego car is ready for any race!

When completing this STEM activity, test several designs and have your students apply the knowledge they learned about physics to hypothesize which car design will perform best, and then test the cars in a head-to-head race. 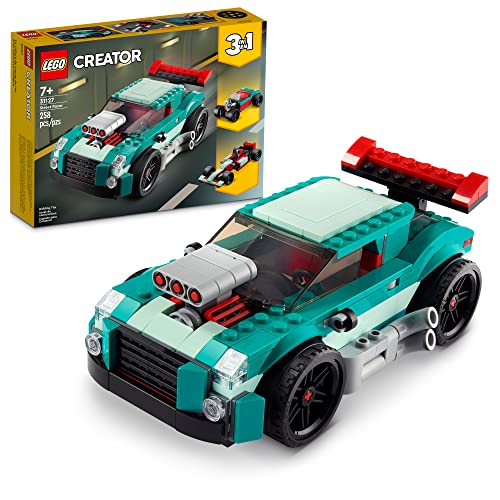 Kids will have hours of fun tearing through cities with the Street Racer, zooming around the track with the race car, or building their own red-and-teal hot rod toy.

Small but powerful? The only way to find out is to build and test this simple vintage LEGO race car! 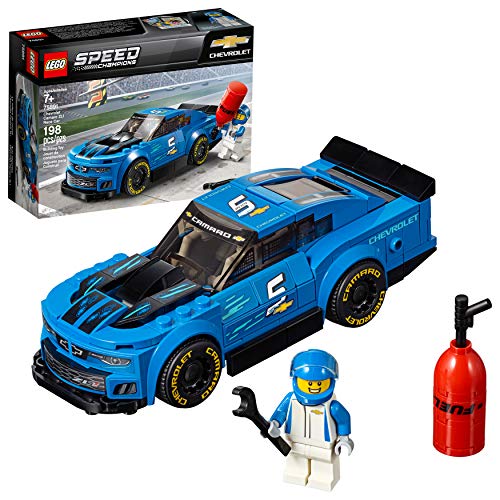 This toy car comes with a Chevy Camaro racing driver minifigure and a fuel canister element for creative play, as well as a minifigure cockpit with an adjustable roll cage, removable windshield, and wheels with Chevrolet Camaro-branded rims.

Kids and car enthusiasts can build the Lotus Evija and explore its innovative design before joining friends for Speed Champions race. 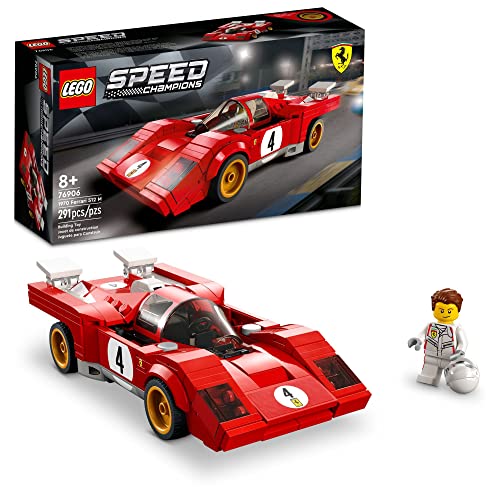 Kids can build an iconic race car with the LEGO Speed Champions 1970 Ferrari 512 M construction set. This faithful LEGO recreation captures the essence of the legendary 1970s endurance race car, which was renowned for its fearsome performance and epic on-track races. Small but mighty? The only way to find out is to build this simple LEGO race car and try it out! 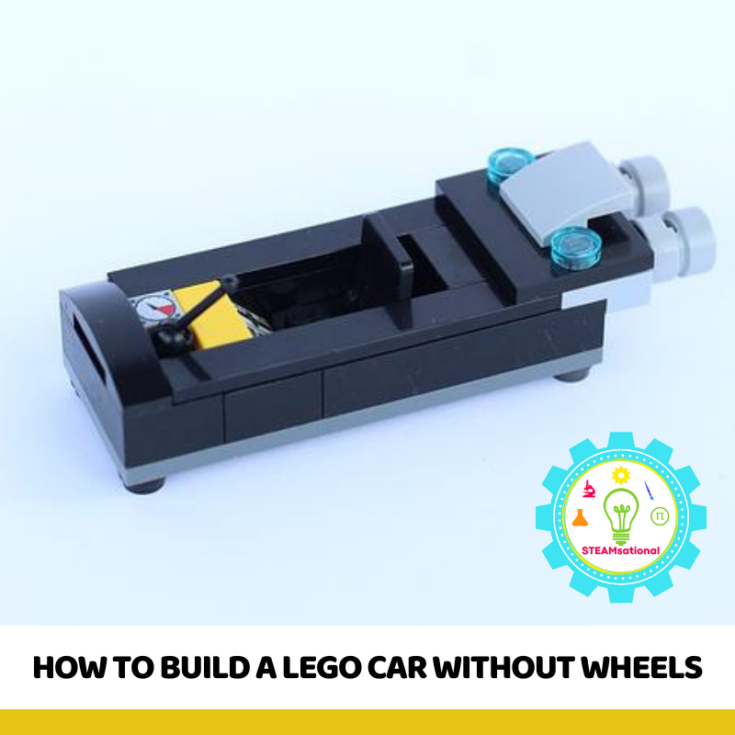 Race cars don’t always have to have wheels to go fast, check out this LEGO Car Without Wheels, it is definitely a speed contender with the side jets and smooth design. 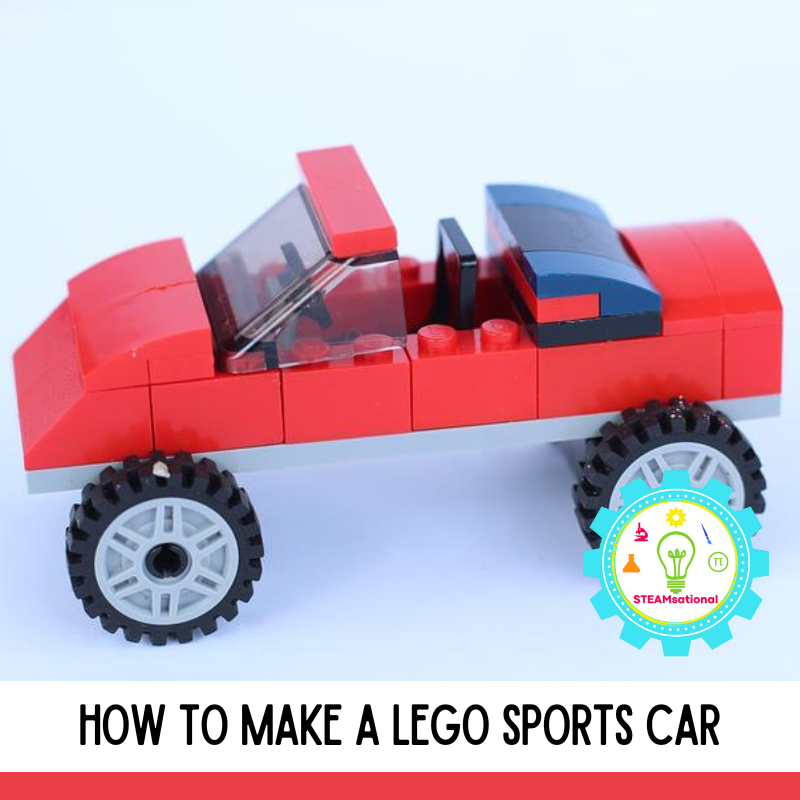 Try out this sleek convertible LEGO Race Car tutorial we created in a flaming fire engine red of course. I know this one is fast and travels far!

Are these LEGO Rocket Cars really the fastest? Find out on the tutorial from LEGO Librarian, this one requires a bit more than just LEGO, you will be building a Stonehenge type tower and using rubber bands, but it looks totally worth a little extra effort!

If you like the youtube video builds better than print instructions this How to create simple LEGO MOC Race Car tutorial will get engines revving and is made with basic LEGO, no hard-to-find bricks.

Another fun one from Frugal Fun 4 Boys is this LEGO Slingshot Car, you just know this little racer is gonna fly!  Grab some LEGO and a rubber band and get ready to race.

Frugal Fun 4 Boys has all the instructions to build a Rocket Powered LEGO car that makes for a really fun engineering lesson too! 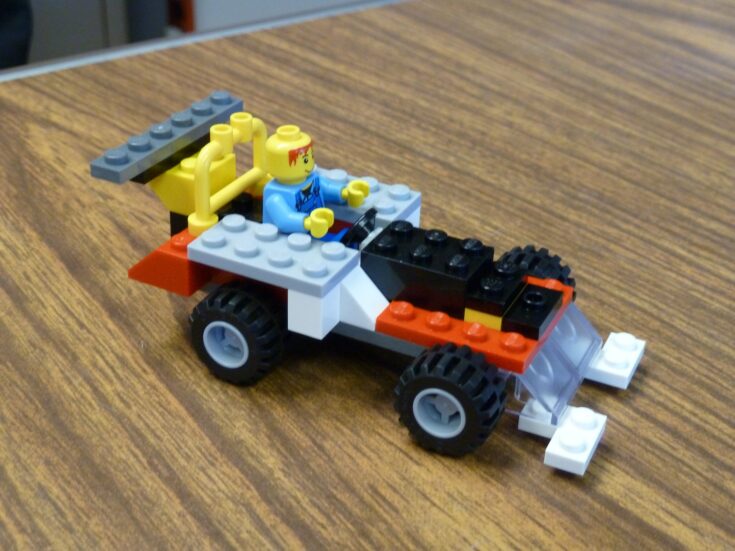 Try this simple race car tutorial that will have you burning up the speedways in no time. Don’t forget to include a Minifigure to steer the race car!

How To Build A Lego Race Car

This easy tutorial video from The Create Kids shows step-by-step how to put together a fast LEGO race car, right down to the spoiler!