We were inspired by this science experiment and decided to conduct our own sugar density experiment to see if we could figure out what unicorns eat!

This sugar rainbow density tower is not only a fun project to make, but it also teaches kids about the density of sugar.

Keep reading to learn how to make your own sugar density tower!

It’s a fun way to learn about liquid density for kids! 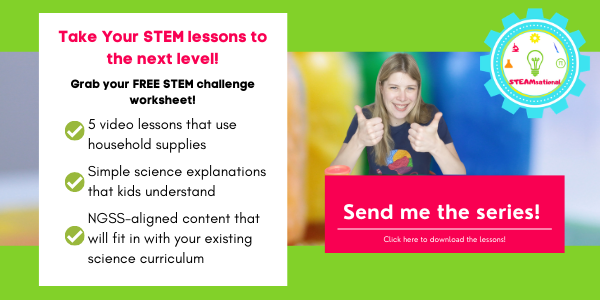 We decided to see if we could make a liquid rainbow that unicorns could drink.

Get the complete 11-page lesson plan for this experiment complete with quiz, worksheets, supply list, printable directions, and more!

My girls were not convinced that we could make a rainbow from just water and sugar.

They thought once the liquids were added together, they would form one gross brown color.

The hypothesis was that it was impossible to make a liquid rainbow.

This experiment is a variation on the density tower. Typically, different liquids are used to make each layer, like oil and honey.

But for this experiment, we used sugar and water only.

What you need for the sugar rainbow density tower experiment:

After donning safety goggles, heat 36 tablespoons of water until boiling on the stove.

When the water is boiling, add six tablespoons of water to each cup.

The next part is tricky, and takes some time. Pour the purple liquid into the glass beaker. Next, add the colors in reverse rainbow order using a pipette.

Squeeze the color onto the side of the beaker and let the liquid run down into the cup. This prevents the liquid from mixing and keeps the layers separated.

Once all layers are added, carefully transfer the rainbow density tower to a windowsill and examine the layers. Can you see all the layers?

Another experiment you can try is to add a drop of water to the bottom layer with a pipette. Watch as the drop of water slowly rises through the layers to the top.

The color layers remained separated because their density was different. Sugar water is slightly different than other types of density experiments because if shaken, the entire mixture will combine.

But if added in careful layers, the differing density of the liquids will keep the colors separated and unicorn-friendly.

The kids were delighted to see the layers remain separate during this experiment, and they both thought that any unicorn would be happy to drink the liquid.