We love using slime recipes for educational fun and learning. While we often use slime to illustrate scientific concepts, this time, I thought it would be fun to use slime to celebrate Mexican culture! This Cinco de Mayo slime is a fun, hands-on way to celebrate Mexico and the history of the Mexican flag using what kids love best: slime!

Kids will love making and playing with this flag-themed slime and you can use this activity to teach them a little bit more about the Mexican flag, Mexican culture, and the history of Mexico and Cinco de Mayo.

This activity would be perfect in a Cinco de Mayo unit study! 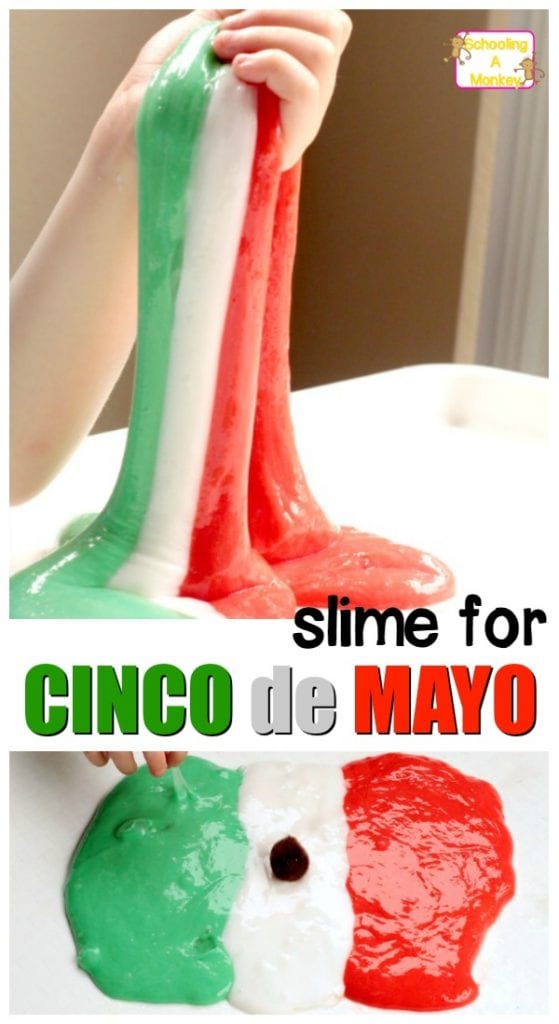 Slime is made when boron mixes with the polymer chains in the glue, creating strong, but flexible bonds between the molecules. There are so many fun tweaks you can make to a basic slime recipe, like my kid’s favorite, fluffy slime! Since this slime does contain borax, if you have a sensitivity to it, you may want to try our baking soda slime instead. 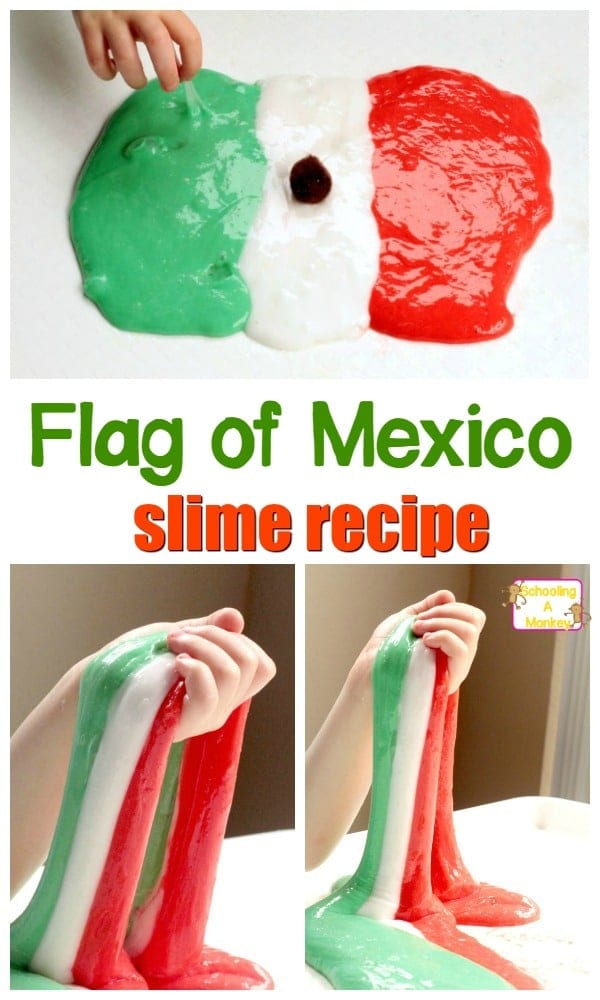 If this is your first time making slime, you should follow along with our post on slime troubleshooting.  Luckily,liquid laundry starch slime made with school glue is the easiest slime recipe.

If you don’t want to waste a lot of ingredients, try mixing up a small batch first to make sure you won’t have to tweak it before you make the larger version. We always stock up on gallon sizes of glue and the large laundry starch just in case something goes wrong (but it almost always goes smoothly).

HOW TO MAKE THE BEST CINCO DE MAYO SLIME EVER!

Follow these directions and you’ll have the best Cinco de Mayo slime ever!

CHECK OUT THE SLIME MADE EASY E-BOOK!

Make this slime on Cinco de Mayo to celebrate the culture of Mexico and learn at the same time! 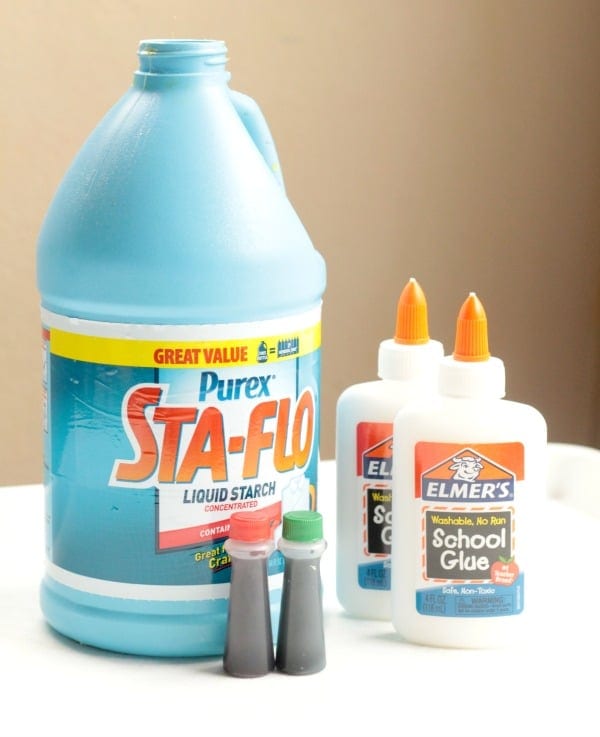 Please note: This slime is not borax free. If you need a borax free slime, try this recipe for borax-free slime. 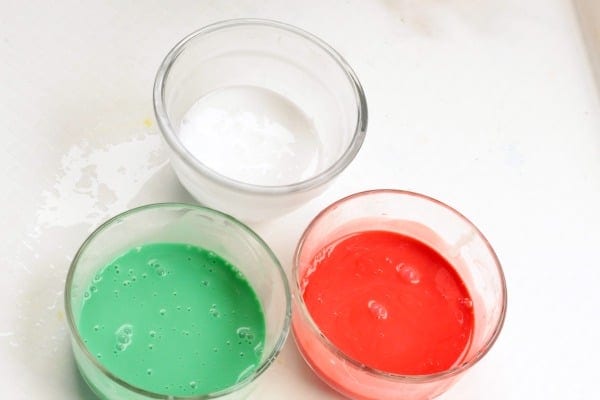 First, divide your glue into three parts. We used two bottles of glue, which is one full cup. The type of glue you use matter. Elmer’s white school glue is by far our favorite glue to use to make slime. Fill a cup with water, and divide it evenly between the three containers of glue. Dye one glue mixture green and another red, leaving the last white. 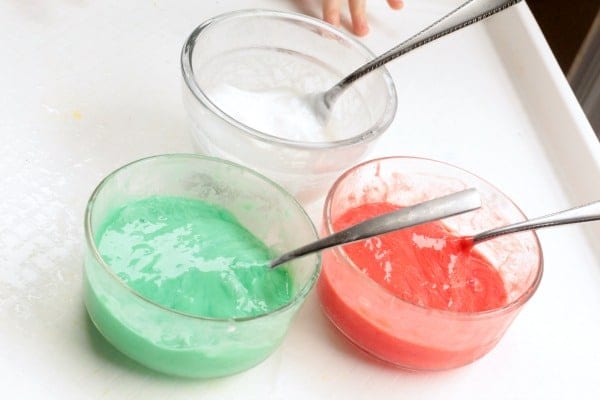 Pour one cup of liquid starch evenly between the three colors of slime.  Stir with a fork until the slime is safe to touch and no longer leaves a reside behind. One tip with liquid starch slime is that if you let it sit for about 5 minutes before handling it, it will be less sticky and smoother, and it stretches beautifully. 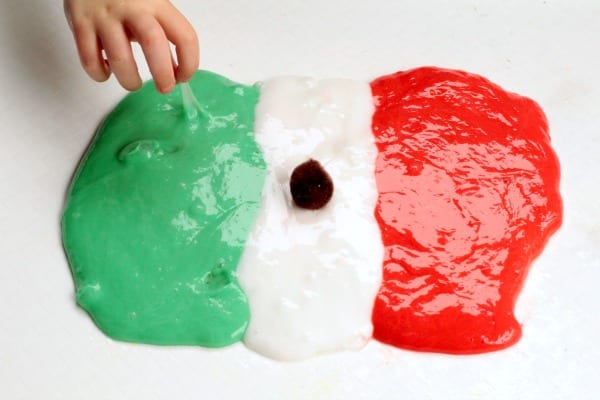 Once the slime is ready, it’s time to make your flag. The Mexican flag has green on the left, white in the center, and red on the right in three equal segments. In the center of the flag is an eagle on a cactus holding a snake.

We didn’t have any eagle toys, so we used a brown pom pom to represent the insignia in the center of the flag. 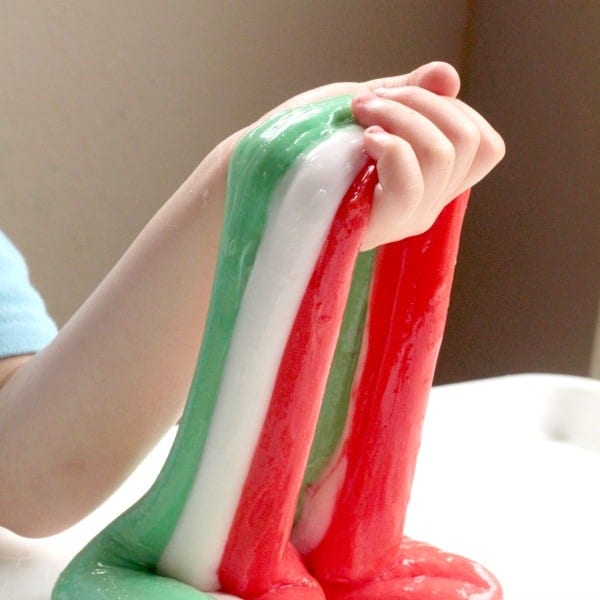 Once the flag is finished, you can stretch and play with the slime until it forms a solid pinkish color. You can keep playing with it after that, but it won’t look as festive. 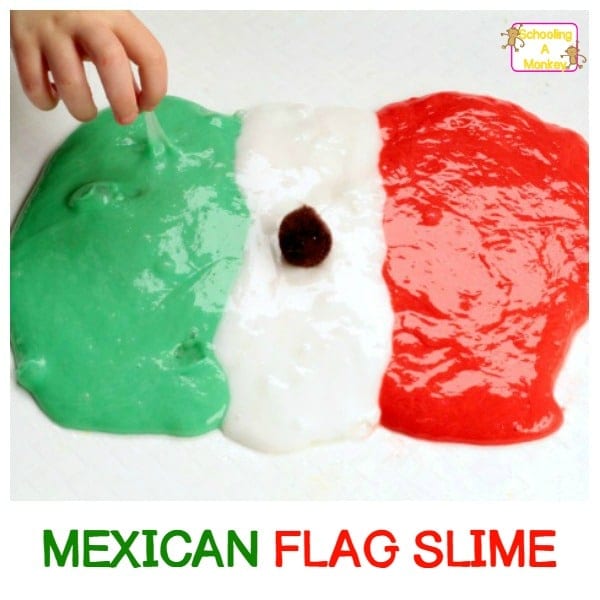 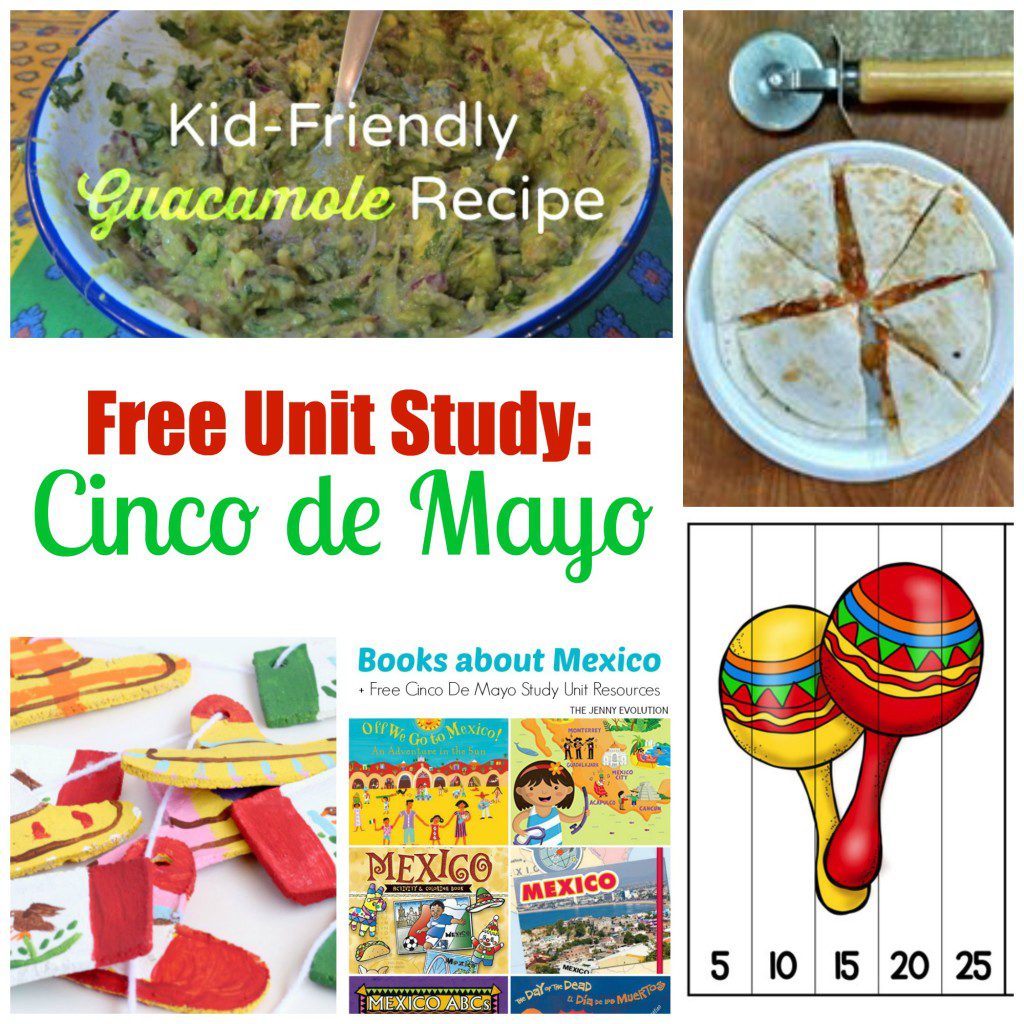 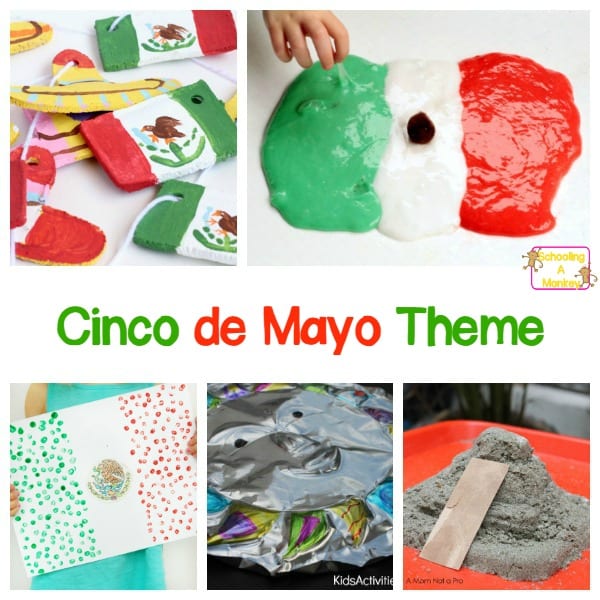 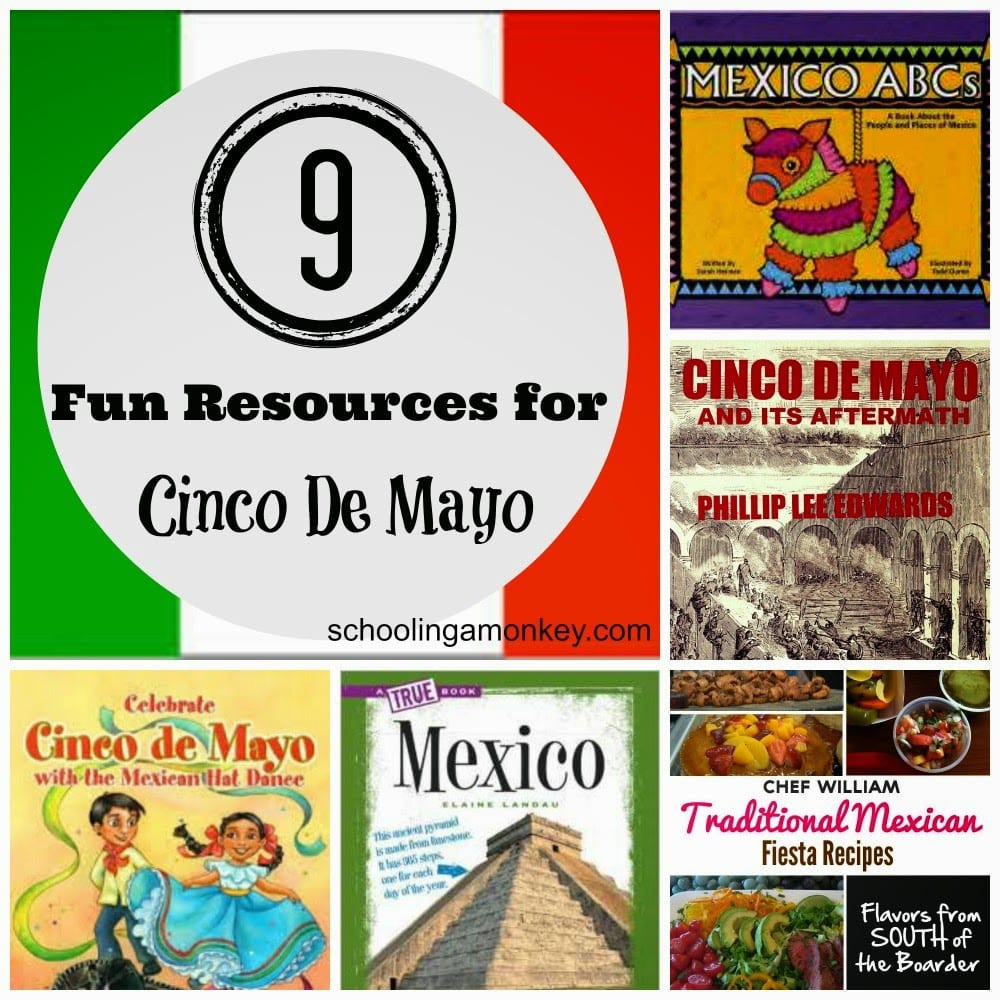