This snow storm experiment can either be a science demonstration or you can create a hypothesis and test variations on the design to make it a science experiment. And use the free STEM extensions for open-ended snowstorm science experiment directions to scale the lesson for preschool, elementary, or middle school!

Follow along to learn how to make your very own snow storm in a jar!

The Science Behind the Snow Storm in a Jar Experiment

Adding paint to the water thickens the water, which makes larger bubbles during the reaction process. The bubbling and swirling colors and glitter looks just like a snow storm!

But you can go further than simple carbon dioxide reactions with this snow storm activity. You may also want to explore the following science topics when making a snow storm in a jar:

If you are making a snow storm in a jar as a science fair project, you must have a hypothesis. A hypothesis is a informed guess about how something might work, or how certain changes might occur.

For this experiment, the snow storm in a jar hypothesis might be that changing how many alka seltzer tablets are added will change how violent the blizzard in a jar is.

Another hypothesis is that the type of oil in the jar doesn’t matter, or that it matters a lot.

Testing these hypotheses will make a fun science fair project for active kids.

Use the STEM extensions below to scale this lesson for preschool, elementary, or middle school!

One thing we’ve found when making a variety of snowstorm jars is that the type of oil changes how the reaction occurs. When baby oil is used, the bubbles are usually smaller, and the jar gets cloudier faster.

When vegetable oil is used, the bubbles are larger and it takes longer for the jar to become cloudy.

Because we like large bubbles, we often choose to use vegetable oil for our storm jar- even though it doesn’t look quite as sky-like.

What you Need for the Snowstorm in a Jar Experiment

For this snow storm in a jar experiment, you will need:

Here are more fun wintery science experiments to try with your students!

Follow along with the printable instructions below to learn how to set up and complete the snow storm in a jar experiment!

Don’t forget to discuss the science behind this chemical reaction when completing this experiment.

What other variations on this snowstorm in a jar experiment can you think to test?

Don’t forget to record your snow storm in a jar experiment data in a science notebook! 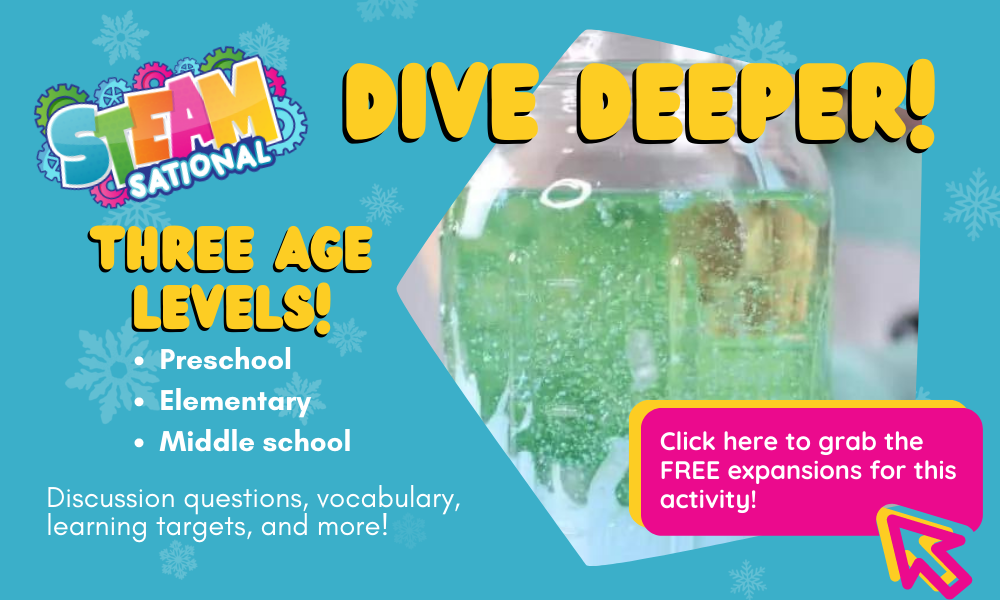 This snow storm experiment can be a science demonstration or a science experiment by developing a hypothesis and testing variations on the design. And, to scale the lesson for preschool, elementary, or middle school, use the free STEM extensions for open-ended snowstorm science experiment directions!

The more tablets you add, the more your jar will bubble and overflow.

As an Amazon Associate and member of other affiliate programs, I earn from qualifying purchases.