Arr you ready for a pirate treasure slime recipe? Although we’ve made a lot of slime recipes to date, this pretty, sparkly version was a really big hit with the kids, and I really loved it too!

We used this pirate slime as a fun science activity in a pirate thematic unit recently.

You can see some of the other activities that will go along with a pirate theme before I share the recipe to make your very own treasure slime!

Kids will have a blast with all of these activities, but they will REALLY love playing with the sparkly slime.

How to Make Pirate Slime

Read on to see how to make the very best pirate treasure slime! And don’t forget to try our other pirate activities: Pirate summer camp and learning how pirates navigated.

THE SCIENCE OF PIRATE TREASURE SLIME

Slime is made when boron mixes with the polymer chains in the glue, creating strong, but flexible bonds between the molecules.

How to Make Glue and Starch Slime Work

Follow these directions and you’ll have the best pirate treasure slime ever!

CHECK OUT THE SLIME MADE EASY E-BOOK! 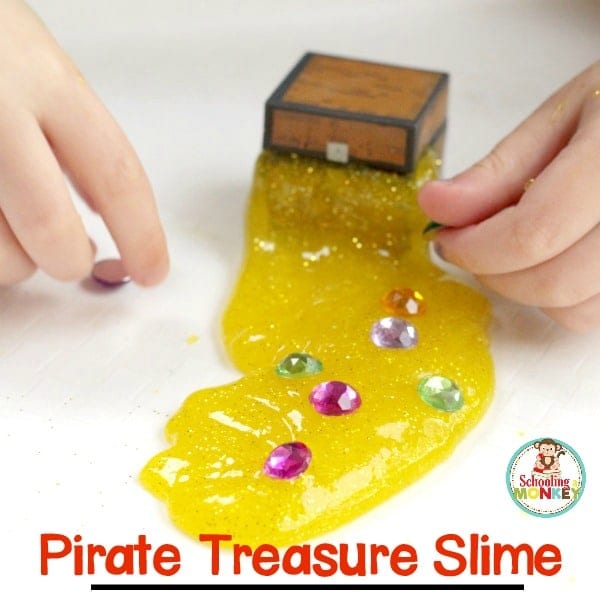 Add 1/2 a cup of laundry starch and mix. The mixture may be gloppy at first, but it will dry out and stretch the more you play with it.

Stretch it and get it dry before handing it to a child to cut down on mess.

If you like, give your children some plastic jewels and plastic coins to add to the slime. We thought our pirate treasure looked more authentic this way.

The slime was like the solid mass of treasure you always see in cartoons that isn’t drawn enough to stand out. :-)

There are a lot of ways to learn with this slime, such as by counting the jewels, making patterns of coins, or forming the slime into letters and numbers.