This St.Patrick’s Day, make this St. Patrick’s Day slime treasure hunt! Kids will love playing with the slime and finding the hidden coins.

If your kids love slime recipes (and what kid doesn’t right now?), they they will love this fun St. Patrick’s Day slime with a treasure hunt twist!

The coins are stuck in the slime and get buried in the slime. Then, as kids pull them out, they stretch and play with the slime.

Preschoolers and kindergarteners can even use this activity to practice counting!

Related: Slime Recipes for Every Occasion, Holiday, and Season

Slime is made when boron mixes with the polymer chains in the glue, creating strong, but flexible bonds between the molecules. There are so many fun tweaks you can make to a basic slime recipe, like my kid’s favorite, fluffy slime!

How to Make Coin Slime

Follow these directions and you’ll have the best St. Patrick’s day slime ever!

What you’ll need to make the St. Patrick’s Day slime: 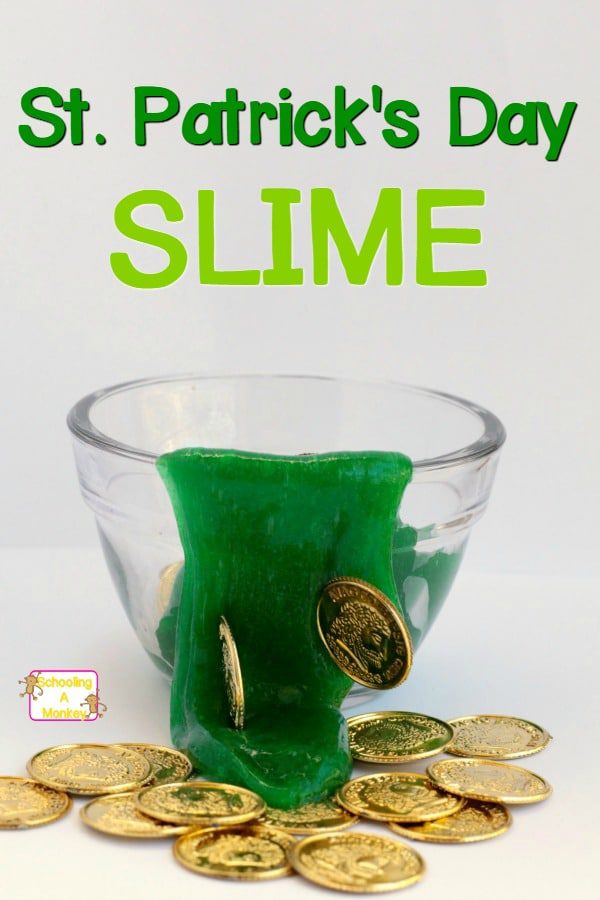 Add 1/2 a cup of starch to the container. Stir until it becomes impossible to stir anymore with the fork.

Let the mixture sit about 5 minutes. This will keep it from being as sticky.

After five minutes, pick up the slime with your hands and squeeze it around a bit to mix any remaining glue.

Once the glue is stretchy and dry, add the coins.

My preschooler used the slime as a sort of coin treasure hunt.

First, she tried to sink the coins into the slime, then later, she stretched it out and removed the coins one by one. She enjoyed counting the coins as she pulled them out.

This slime kept her occupied for an hour!